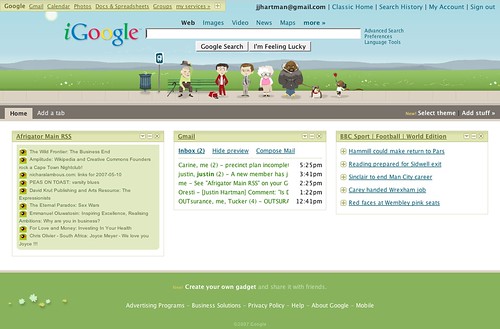 It’s no secret and it’s been out for a long time but iGoogle is really starting to amount to something. Previously known as Google Personalized Homepage the team at Google are now officially calling it iGoogle.

Simply put iGoogle allows you to customise the Google homepage with relevant Gadgets that you can add such as Gmail, News, Weather and a lot more.

The screenshot above shows my new iGoogle page which I’ve customised to suit my needs and for whatever reason is really groovy in my opinion.

What’s really cool is that I decided to write a Gadget for iGoogle, using the Google Gadgets API, that pulls in the RSS feeds of Afrigator so now I can stay in touch with what’s happening on Afrigator just by visiting Google.

I don’t know if any of you will find this useful but I’ve made this Afrigator Gadget publicly available and you can get it by visiting this link or you can just click the Add to Google button below.

It’s version 1 so I’ll still make some more changes to it as I pick bugs up but you can completely customise this Gadget in any way you like plus it functions in almost an identical way to Afrigator by allowing you to preview a post before visiting a blog site.

You can also add the Gadget multiple times to have color coded feeds which means you have full control over which RSS feed you want to display on your iGoogle page.

Let me know if any of you find this useful.