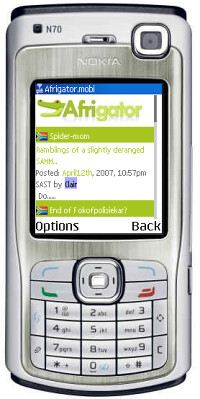 It’s been just over 10 days since Afrigator hit the waters and so much has happened it’s scaring the living crap out of me.

The latest addition to the Gator family is Afrigator Mobile and you can check it out on your mobile at http://afrigator.mobi.

I have to warn you this is my first Alpha release of Mobile and you can be assured there will be bugs, lots of them! At the moment the mobi site uses XHTML which is not ideal and will be converted to WML for beta but it’s certainly a start. Also, because a lot of sites aren’t WAP orientated we will be directing most of the content from the mobi site rather than linking to the blog site directly but for the moment if you click a link you’ll be taken to the bloggers site which may or may not render pretty :)

I’m also trying to get some perspective here with what’s happened to Afrigator since its launch so I’ve decided to highlight a few key things and stats which have all taken place since our launch.

A special thanks to everyone involved for making this happen. Mike and Mark have been awesome in this process but more importantly you guys have made this the success it is quickly becoming.