On the 15th of January 2007 I launched a MediaWiki website called the Debian Wiki which used to be hosted at linux.justinhartman.com. I began this website solely for selfish reasons as I wanted to document how I got various software packages up and running so I could come back to them at a later stage for easy deployment.

I had no choice really but to do this because everything I found online had become outdated and I had to solve my challenges by myself. What I didn’t realise was how popular this wiki would become and people were using these howto’s on a daily basis.

The objective back then

I was a Linux noob and had no experience but I had a strong desire to learn. I loved the ethos of what Linux represented and as I began my journey I realised just how out of my depth I was. This Linux stuff isn’t for sissies.

I learnt mostly through trial and error and I documented every step I took along the way. In the true Linux spirit I felt it made sense to share my learnings with others who may be interested. Thus the website was launched and the original homepage in 2007 had this to say about what the Debian Wiki was all about.

This wiki is dedicated to various HOWTOs on setting up a Debian GNU/Linux system. There is a ton of documentation out there covering almost every aspect of using Debian however I found that most only relate to the older Debian Distros. I am always looking for the best out-of-box solution for the newer Debian distros namely Debian Etch (version 4) and Debian Sid (unstable version) which is what speared me on to start this wiki.

Most of the content found in this wiki was adapted from documentation I found for the older distros, i.e. Debian Sarge (version 3.1), which I have used as a reference point and adapted to work with either Etch or Sid. I’ve noticed that using HOWTO’s from Debian Sarge require some tweaking to work with Etch and Sid and as I figure these out I’ll post on the wiki accordingly. I am also very active on the Debian and Ubuntu mailing lists and forums and a lot of the solutions to problems I encounter come directly from using them.

This wasn’t the very first design I had for the wiki and I tried to change the design quite regularly. This version was certainly the design I liked most. 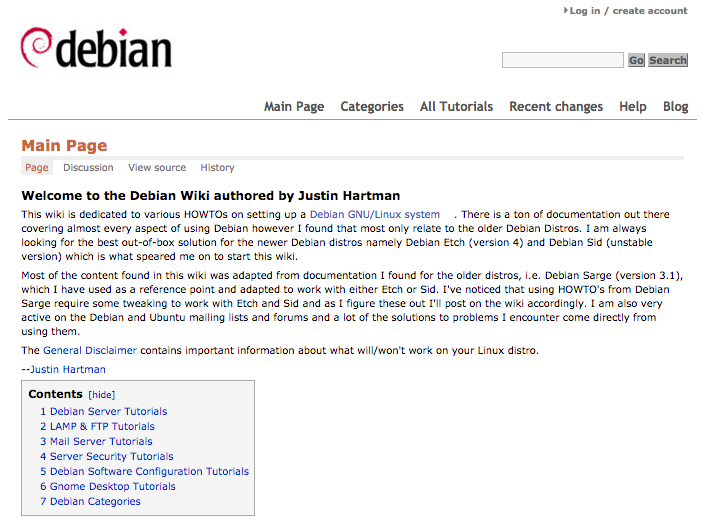 Unbeknownst to me I picked what I’ve come to believe is arguably the Godfather of all Linux distributions. This is not just my opinion either. Debian has led many innovations since it was first released in September 1993 and is one of the most popular for PCs and servers. It has been used as a base for many other distributions.

I certainly did not choose Debian based on what I understand now, I chose it because of one key bit of superior functionality; the APT software package manager. I tried many Linux derivatives but due to my Linux virginity I always ended up breaking my operating system because I didn’t know what I was doing half the time.

Debian, to this day, remains the only Linux operating system I trust to install any software packages on, and perform major release upgrades without fear of rendering the operating system useless. Even Ubuntu, which is very closely linked to Debian has ended up broken when upgrading to new releases. There is a reason Debian is reliable and that’s due to their extremely rigid policies which is what a lot of people don’t like about it.

Oh, there was also another reason why I chose Debian, because I really digged their logo!

As I learnt more about Debian and my tinkering progressed so did the howto list expand quite rapidly. The wiki ended up with a solid set of howto tutorials covering the following:

Russians and Godaddy collude and I lose everything…

On 27 March 2014, seven years and two months after I launched the Debian Wiki, the Russians hack my server and this is what was left. 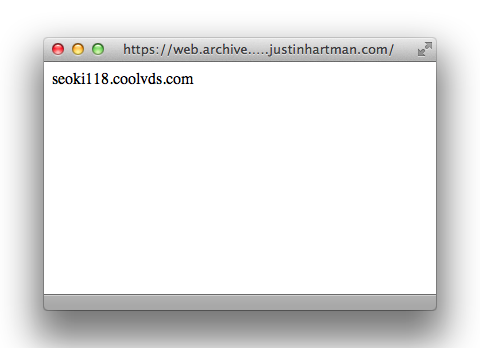 Not long thereafter I realise I had lost complete ownership of my domain justinhartman.com as well as the content. Godaddy, the registrar whom I registered my domain with back in 2005 were politely telling me that I no longer owned the domain. After many back and forths Godaddy informed me I never responded to their automated email to renew my domain. I vehemently disagreed with them and proved I had never received said emails.

I was so angry that I even took the matter up with ICANN to little avail. I could bore you even further but to save you I’ll end by saying I had no choice but to accept that nearly ten years of content I had produced on my personal site and the wiki was lost forever.

Mr Bim Sasarn, the new owner of justinhartman.com is very pleased with his purchase I would imagine.

Out with the old, in with the new?

Three years later and I am still sad that I lost everything. That said, I am attempting to find as many of the old howto tutorials as I can find using Internet archives, Google and any other options that pop up along the way. The howtos are now so old and people will probably never use them but I’m going to get them back up as soon as humanly possible anyway.

At the same time I am also going to be adding a whole series of new howto tutorials that will include Ubuntu, because this is the other flavour I’ve used as well as OS X / macOS. In fact, you can expect many different types of howtos because there is a lot to add around web (frameworks, development) and mobile (iOS, Android) too.